Statue of Puzur-Ishtar Shakkanakku (military governor or prince c. 2050 BC)) of Mari appointed by the Akkad Kings. According to the inscription below the right hand above the hem of the garment , the sculpture was originally made as a votive gift. The name Puzar-Eshtar, Prince of Mari, is mentioned twice, but the figures headgear is the horned cap of a deity, the statue cannot depict the mortal prince. The clasped hands of the figure and the text make it certain that the statue once belonged to the inventory of a temple, but where the temple stood is not known, despite the mention of Mari in the title of the prince. Like many other monuments, the statue was looted from its original site in Mari and the body was was discovered in the museum of Nebuchadrezzar’s palace at Babylon (604-562 BC). This oversized statue is one of the few large preserved sculptures of the Near East. The head was broken from the body in antiquity and both pieces survived separately. The excavated body was taken to the Istanbul Museum and an exchange of casts with the Pergamon Mus The Vorderasiatisches Museum, part of the head from the Pergamon Museum meant that the statue could be reassembled. The Vorderasiatisches Museum, part of the Pergamon Museum, Berlin .

If you prefer to buy from our ALAMY PHOTO LIBRARY Collection visit : https://www.alamy.com/portfolio/paul-williams-funkystock/babylon-antiquities.html 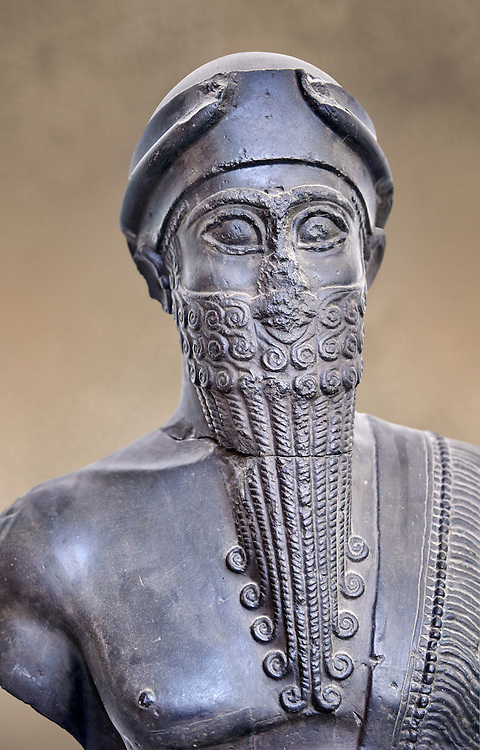