Venus de Milo ( Aphrodite of Milos ) A 203 cm (6 ft 8 in) marble statue from the Greek Island of Milos sculpted in 130 and 100 BC thought to be the work of Alexandros of Antioch;. Louvre Museum, Paris.
The Aphrodite of Milos was discovered on 8 April 1820 by a peasant named Yorgos Kentrotas, inside a buried niche within the ancient city ruins of Milos, the current village of Tripiti, on the island of Milos in the Aegean, which was then a part of the Ottoman Empire. The statue was purchase by the French ambassador to Turkey and it was shipped to France. Legend has it that the statues arms were broken off during transport but this story however proved to be a fabrication – Voutier's drawings of the statue when it was first discovered show that its arms were already missing.

In 1815, France had returned the Medici Venus, to the Italians after it had been looted from Italy by Napoleon Bonaparte. The Medici Venus, regarded as one of the finest Classical sculptures in existence, caused the French to promote the Venus de Milo as a greater treasure than that which they recently had lost. The de Milo statue was praised dutifully by many artists and critics as the epitome of graceful female beauty. However, Pierre-Auguste Renoir was among its detractors, labeling it a "big gendarme". .

If you prefer to buy from our ALAMY STOCK LIBRARY page at https://www.alamy.com/portfolio/paul-williams-funkystock/greco-roman-sculptures.html- Type - Venus de Milo - into LOWER SEARCH WITHIN GALLERY box - Refine search by adding a subject, place, background colour,etc. 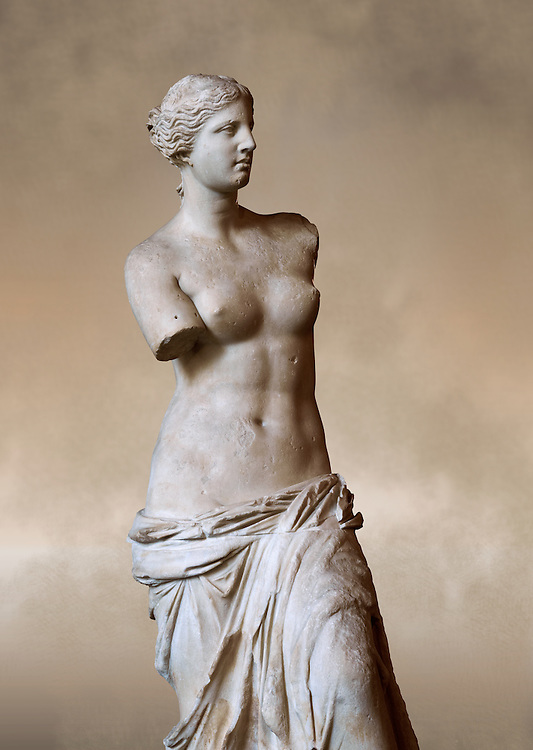