Roman Portrait statue of the so-called General Tivoli a Roman commander circa 70-70BC made in Greek marble and found in the excavation of the Temple of Hercules, Tivoli, Italy. A masterpiece of hoary sculpture from the late Republican period, this statue portrays an elderly person with a young, nude body. The cape (paludamentum) which covers part of the stomach and legs, and the cuirass embossed with the head of Medusa (lorica) which functions as a support, identify it as a high-ranking soldier. It can be presumed that the right arm is raised, as suggested by the chest muscles holdingg the shoulder, and that the figure was leaning on a lance. The style derives from Hellenistic designs pf ‘hero nudity’ (effigies schilleae) used, starting in the 2nd century BC, by members of the Roman ruling class which has a strong political need of self-representation. The authoritarian, imposing stance together with the marked realism of the facial features, is one of the best examples of Hellenistic bravura combined with realistic Italic tradition. Stylistic considerations and the fact that the statue was found in the excavation of the Temple of Hercules which was built during the dictatorship of Cornelius Sulla, date the statue to between 90 and 70 BC. Its commemoration in Tivoli leads us to believe that it may have been someone from the area, probably a lieutenant of Sulla who paid for the portrait himself, or that it was a public honour, in the most important shrine in the city, dedicated to the god-hero called ‘Victor’, i.e, the protector of military expeditions. The National Roman Museum, Rome, Italy 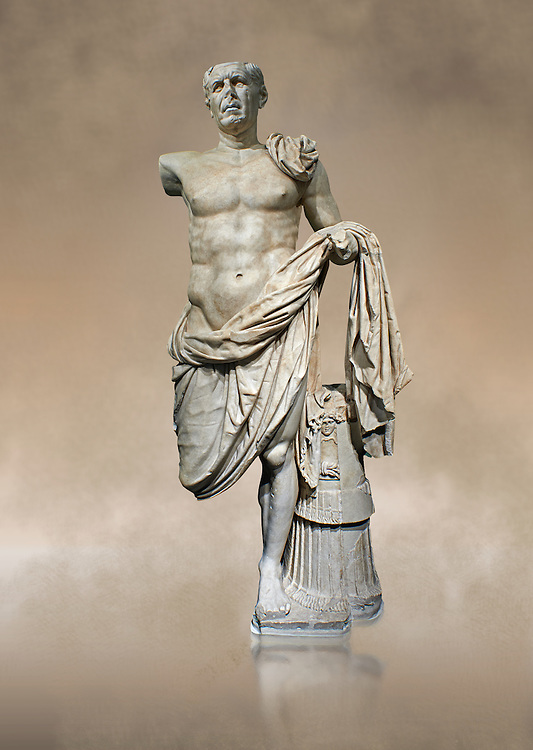