Bedroom E, a private room with a bed (kline), was divided into antechamber and alcove. The room is probably a later reworking, as the doorway is off-center. The decoration of the walls, in contrast to cubicula B and D, is done in muted colors. Slender columns with a surreal superstructure frame aedicula with sacred landscapes. Three of these show travellers making a sacrifice to a herm of Athena. The images refer in various ways to the world of women. The little pictures along the walls of the antechamber show girls engaged in different activities. On the rear wall of the alcove, which has a picture with an amorous theme, the goddess Artemis is shown dressed as both huntress and moon goddess. Two Muses are on the opposite wall. The stucco decorations of the vaulted ceiling show idyllic landscapes with sacred elements and mythological scenes. In one, Phaethon asks his father Apollo to let him drive the chariot of the Sun. Other scenes show statues of Zeus, a statue probably representing Augustus as the new Mercury, disks of the sun, winged victories and grotesque figures, all done in very low relief with the elegance and delicacy of jewellery. The mosaic pavement of this room, known from a contemporary watercolor, had a pattern of squares and stars. .

If you prefer to buy from our ALAMY PHOTO LIBRARY Collection visit : https://www.alamy.com/portfolio/paul-williams-funkystock/national-roman-museum-rome-fresco.html
Visit our ROMAN FRESCO PHOTO COLLECTIONS for more photos to download as wall art prints https://funkystock.photoshelter.com/gallery-collection/Roman-Fresco-Wall-Art-Paintings-Pictures-Images-Photos/C0000nK42a3dDNbU 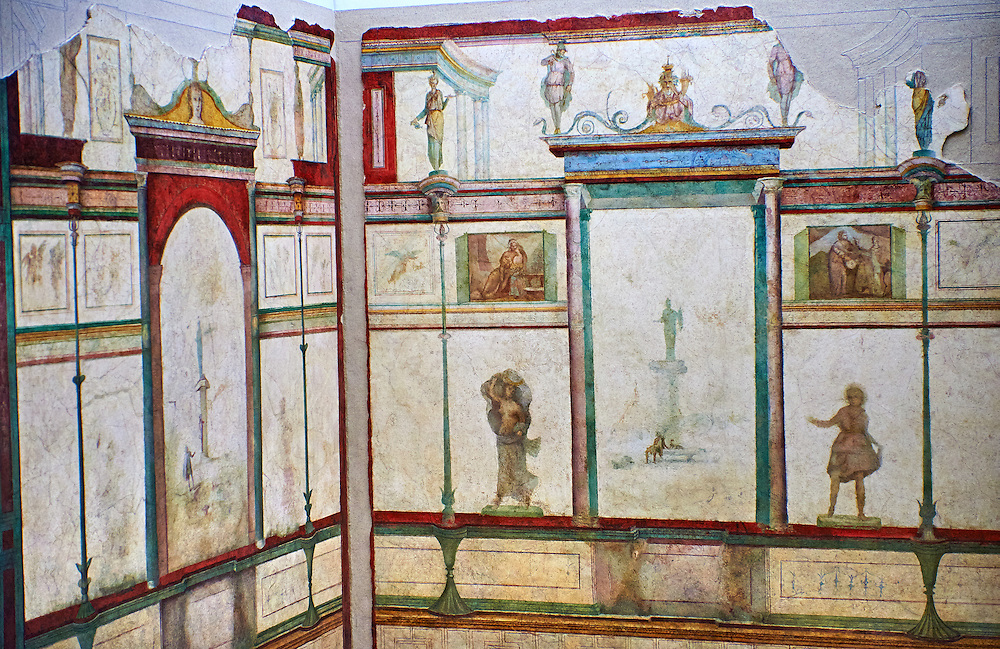