Metiochus and Parthenope, famous with their legendary love for eat: torn apart and then unified after years, they seem to represent the According to the myth, Parthenope is the sister of Polycrat e Ki taken an oath of virginity upon the Heraion which symbolizes the Metiochus is invited to the royal court and meets Parthenope Burin fails in love with Metiochus but in order to keep the oath she has taken, she and chooses to go exile. In this mosaic, we see the two figures sfttngsitting upon an In compliance with the story, the face of Metiochus is directed towards Part e whom he fell in love and the eyes of Parthenope stares at an indeterminate area due to the love she feels yet sees impossible. The mosaic is surrounded by triangular, double mesh ttke, and pyramidal borders. The piece was discovered during the rescue excavation conducted. in 1993. When exposed, it was understood that the main figures used to be at the middle of the mosaic were stolen the tomb-robbers.

The mosaic was brought to Gaziantep Museum with a question mark labeled on it saying "Who knows where? In which country?" and began to be displayed temporarily after restoration. From the photographs sent by the Canadian Archaeologist Sheila Campbell, it was found out that the stolen parts were in the Merin collection in Houston USA and with the initiatives of the Ministry of Culture, the missing parts were brought In 2000 and the mosaic was put on display following the restoration. Those two eternal lovers, who were torn apart by traffickers of historical artefacts and kidnapped separately, have been unified after years. 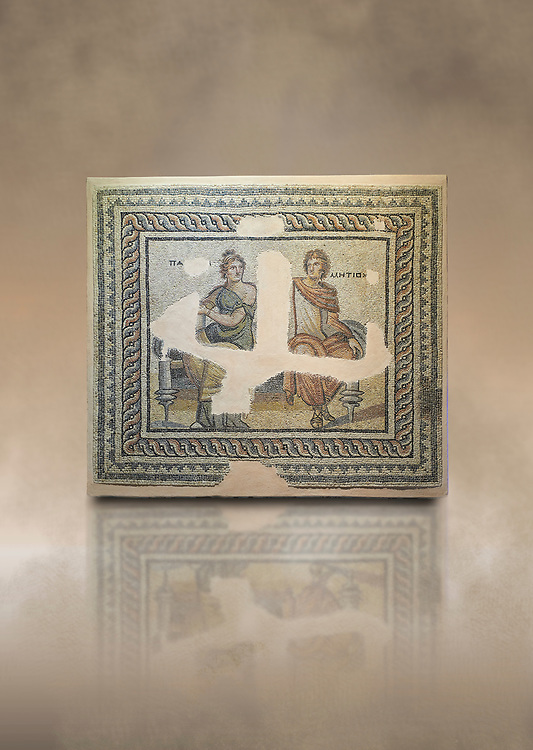