South Porch, Right Portal, Tympanum- General View.This portal is dedicated to the Confessors. Cathedral of Chartres, France. Tympanum and Lintel: Miracles by two very popular saints, Martin and Nicholas, are shown on the tympanum and lintel. Both saints have figures on the jambs below and several windows in the interior lower level and clerestory..On the left is the Miracle of Martin's cloak. In the lower left panel, Martin, a young Roman stationed in Amiens, met a beggar at the city gate one cold day. Moved by the man's suffering, Martin cut his cloak in half and gave him one of the pieces. In the upper left panel, Martin is shown sleeping. His dream is shown on the tympanum; Christ appears wearing the piece of the cloak he gave to the beggar, who had really been Christ..On the right are miracles of Nicholas. In the bottom panel, Nicholas anonymously gives dowries to three indigent girls. On the upper right, pilgrims at Nicholas's tomb, which supposedly gave off a miraculous healing fluid. .Archivolts: .On the lower register of archivolts are miracles of Gilles, including the Mass of St. Gilles (right). The other archivolts show various Confessors.A UNESCO World Heritage Site. .

Visit our MEDIEVAL ART PHOTO COLLECTIONS for more photos to download or buy as prints https://funkystock.photoshelter.com/gallery-collection/Medieval-Middle-Ages-Art-Artefacts-Antiquities-Pictures-Images-of/C0000YpKXiAHnG2k 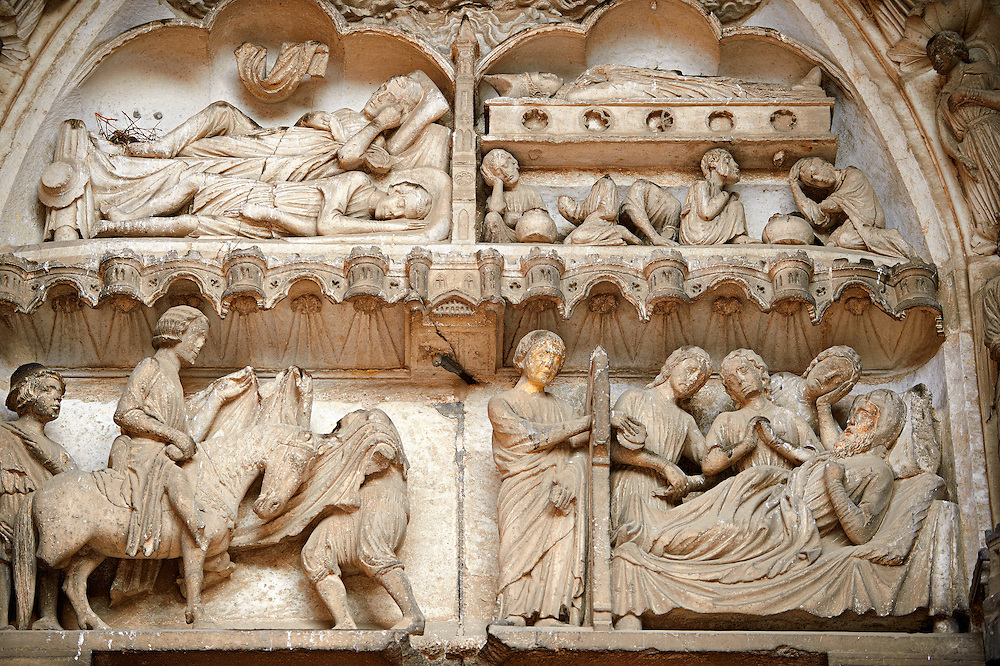