Medieval Rose Window of the North Transept of the Gothic Cathedral of Chartres, France- Circa 1235. A UNESCO World Heritage Site. The 10.5m rose window is dedicated to the Virgin Mary . The central oculus shows the Virgin and Child and is surrounded by 12 small petal-shaped windows, 4 with doves (the 'Four Gifts of the Spirit'), the rest with adoring angels carrying candlesticks. Beyond this is a ring of 12 diamond-shaped openings containing the Old Testament Kings of Judah, another ring of smaller lozenges containing the arms of France and Castille, and finally a ring of semicircles containing Old Testament Prophets holding scrolls. The presence of the arms of the French king (yellow fleurs-de-lis on a blue background) and of his mother, Blanche of Castile (yellow castles on a red background) are taken as a sign of royal patronage for this window. Beneath the rose itself are five tall lancet windows (7.5 m high) showing, in the centre, the Virgin as an infant held by her mother, St Anne - the same subject as the trumeau in the portal beneath it. Flanking this lancet are four more containing Old Testament figures. Each of these standing figures is shown symbolically triumphing over an enemy depicted in the base of the lancet beneath them - David over Saul, Aaron over Pharaoh, St Anne over Synagoga, etc .

Visit our MEDIEVAL ART PHOTO COLLECTIONS for more photos to download or buy as prints https://funkystock.photoshelter.com/gallery-collection/Medieval-Middle-Ages-Art-Artefacts-Antiquities-Pictures-Images-of/C0000YpKXiAHnG2k 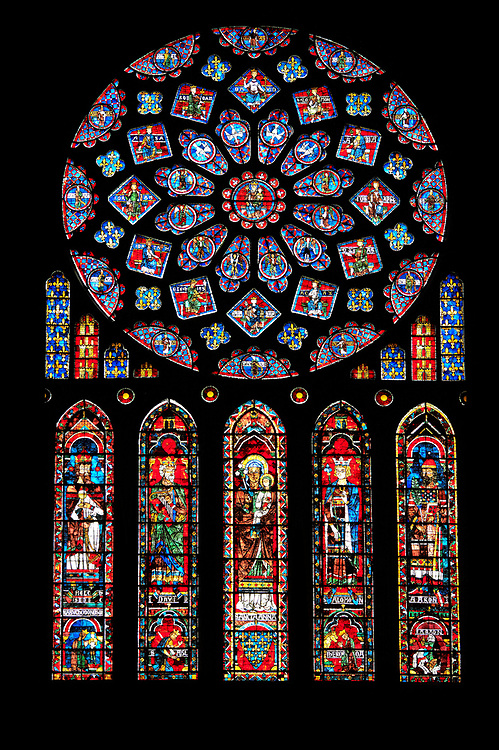