Ptolemaic Egyptian statue, 4th cent BC, gabbro. Kunsthistorisches Muesum Vienna inv 20. Height 26cm. The bust once formed part of a standing statue with a wide, flat back pillar bearing four columns of inscription. The position of the arms suggests that the man held a stele or a small shrine. His facial features and bag-like wig are characteristic of the Late Period, but there are unmistakable traces of later reworking.

Only the upper part of a standing statue of a man has been preserved: the head, shoulders and chest. The nose was broken off and has been repaired. Although this has been done in the same stone as the rest of the statue, the nose is probably not the original because the left nostril is too big at the point of transition to the face. It is likely that the nose was added during a modern restoration using some of the still extant fragments from the bottom part of the statue, or from the levelling of the broken surface below. The man is depicted with the bag-shaped wig characteristic of the Late Period. His clothes consist of a wrap-around cloak tied at the chest, and beneath it the so-called Persian garment which consists of a tunic with a V-shaped neck in which the round neckline of a vest can be discerned. One tip of the cloak hangs down on the right side of the chest, while the other tip has been rolled up, realistically represented with all its folds. Judging by the angle of the upper arm, the statue should be reconstructed as either naophorous or stelaphorous, i.e. as a statue holding a small god's shrine or a small divine figure. As is customary at this time, the statue has a back pillar which reaches up nearly to the middle of the head. 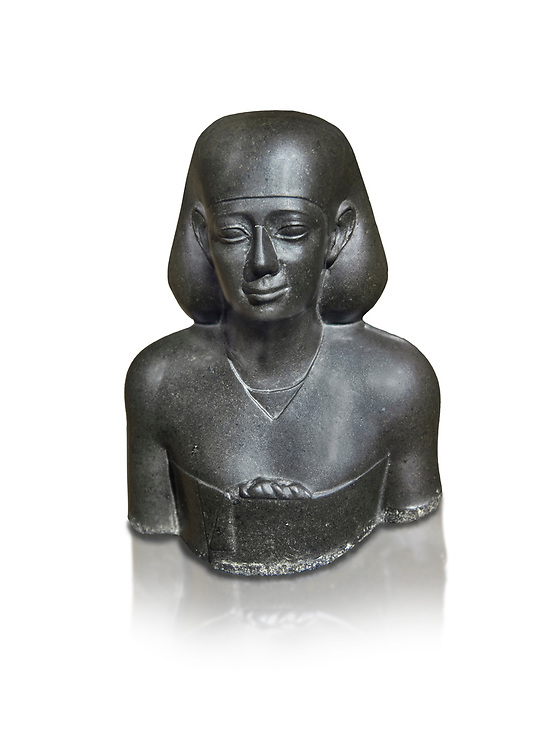