Roman Fresco with a boat decorated for a festival and marine life from the second quarter of the first century AD. (mosaico fauna marina da porto fluviale di san paolo), museo nazionale romano ( National Roman Museum), Rome, Italy. inv. 121462 .
The frescoes depict boats decorated as boats which went along the Tiber on festival days; their shape appears to be the caudicariae boats, used to transport merchandise. In the fresco fragment exhibited here (Ambiente E) the boat on the left depicts probably the group of 'side Serapide and Demetra on the stern, whereas the one on the right presents a crowned character on the bow and, on the stern, a feminine figure fluctuating in the air. Between the two boats, a young boy (a cupid or Palaimon-Portunus) rides a dolphin. All around are depicted several fish incredibly casting their shadows on the sea. The ichthyic fauna, lifeless as in still life decoration, is detailed as in a scientific catalogue. For the most part the represented species live next to the coast or were bred by the Romans in the piscinae salsac or in ponds. It is possible to recognize the rock mullet (mullus sunnuletus) and the mud one (mullus barbatu4 the scorpion fish (scorpoena) the dentex (dentex dentex), the aguglia (belone agus) the dolphin (delphinus delphis) and the golden mullet (lire curate). . 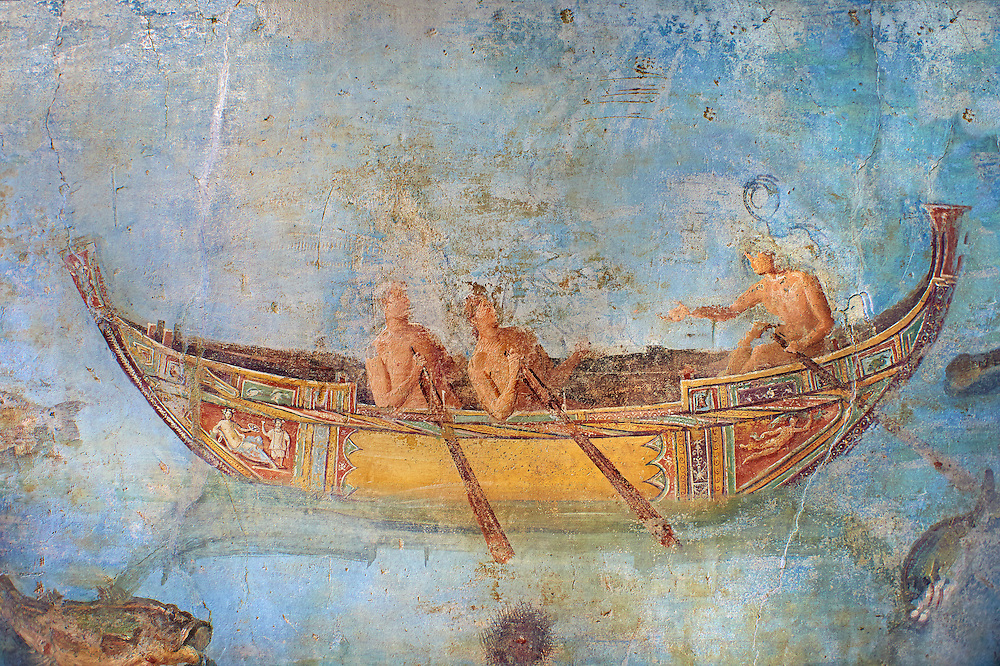